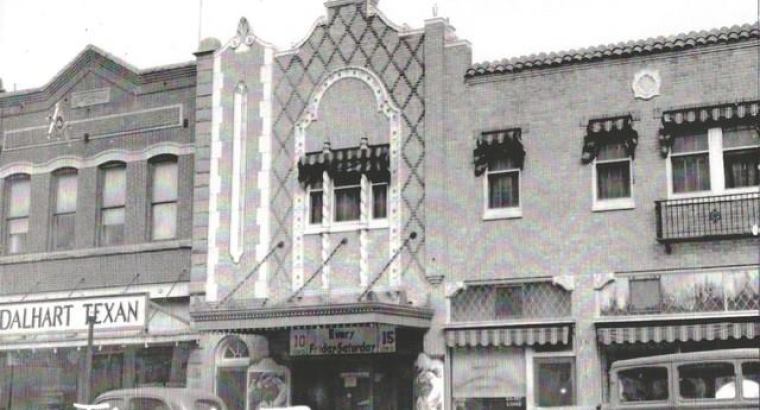 Built in the 1920's, by W.L. (Wally) Hamilton, the La Rita has a rich history in contributing to the cultural development of the Dalhart area. In 1942, J.C. Parker bought the right to manage both the Mission and the La Rita theatres. Mr. Wally Hamilton, who had moved to Beverly Hills, California, still retained ownership of the La Rita building. The Mission theatre building was owned by Dick Coon.

Mr. Parker had the La Rita remodeled in the summer of 1942 in Art Deco style. The USO Center that had been in the front of the building had to relocate in order for the auditorium to be widened. The seating capacity of the theatre was increased from 400 to 650, and new seats were installed throughout. It featured about 40 "love seats", which were actually a seat and a half. New air conditioning, sound equipment, and projection equipment were installed as well to make it one of the most modern movie theatres in the Southwest.

Dalhart had three military bases and many young men trained here. a Quarter Masters Unit held their reunion in Dalhart in the 2000's. Many of the veterans brought their wives or family to the La Rita to show them the site of many memorable times.

Mr. Parker and his family lived upstairs in one of the two efficiency apartments. Linda Childers was one of the Parker children.

As the Dalhart economy began to decline with the end of World War II, the theatre was home to movies featuring Roy Rogers, Gene Autry, Lash LaRue, Flash Gordon, and a host of others. Families came to town on Saturdays to shop, and for the kids to see double features. The ticket price was a dime, as was a pop and popcorn. When the last cowboy rode across the silver screen in 1957, the movies were stopped at the La Rita, but continued to be shown at the Mission theatre.

The building was silebt except for a variety of enterprises along the sidewalk. Included were a coffee shop, a bus terminal, a pet store, and photography studio, a barber shop, a gourmet popcorn place, and the office of the White and Nisbett insurance agency. The seats were removed from the auditorium. Some were used in the Peoples Chapel, when it was located in the old JayCees building. The gutted auditorium was then used as a warehouse space.

Dalhart Community Theatre, Inc. purchased the building in 1989, with an elaborate plan to transform the neglected beauty, into a performing arts theatre.

One of the first big challenges was a new roof. Then the abatement of the asbestos, the replacement of water lines, sewer lines, gas lines, conduit for electrical lines, and the compliance of building codes was done step by step. We exposed the steel girders in the ceiling and the 4x6 and 6x12 studs in the walls. When the new public rest rooms were available; we encouraged our guests to "be sure and see the rest rooms". We wanted them to share our vision of a vintage opera house.

We had many fund raisers in the next few years to continue our dream of a legitimate theatre. We sold engraved granite blcoks to be installed in the front sidewalk. We did have an Amarillo architect, Bill Underwood, who made a scale model of the finished, fully decorated building. The original movie theatre had no balcony or second floor seating. We also had the enduring energy and expertise of Carol Hendrix, as our guide and mentor. The financial support of our trade area was a steady source of encouragement as the theatre progressed.

The original La Rita auditorium seats had bean stored in three or more places. We gathered from airport hangars, farmstead barns, and what is now the police station. After inventorying the various parts and pieces, we had enough for 224 chairs; the auditorium floor and two rows in the balcony. With the help of community education and the school district; we were able to use the Texas Department of Criminal Justice's reconditioning plant to refurbish these seats. The Honor Squad for the Dalhart TDCJ installed the refinished seats.

Performing continued during the rebuilding process. Only one summer was the theatre dark, due to scaffolding needed to install the ceiling. This would have been an unsafe environment. Our guests did not seem to mind the construction site or the borrowed folding chairs or the temporary stages and sets.

As you admire the La Rita of today, it is built to serve many generations to come. The light fixtures are reproductions of antique light fixtures; the stairs, railing, and stage flooring are oak, the marble flooring in the lobby, the woll carpeting, and the mohair upholstery are of first quality. The grand drape (the rose colored Austrian curtain) and the black velvet side and back curtains were custom made for the La Rita. A concert grand piano was purchased in 2001. Our board continues to upgrade the sound and lighting technical equipment (hardware and software), microphones and amplifiers, and the computers necessary for a cutting edge facility.

In 1997, we officially changed our name from the Dalhart Community Theatre, Inc. to The La Rita Performing Arts, Inc., with the State of Texas and with the Internal Revenue Service. We are a 501(c)3 organization; a non profit corporation; therefore any contributions you make to the La Rita are tax deductible.

In the summer of 1980, Dalhart Chamber of Commerce manager, Ed Phelps, and local banker, Charles Steel had a dream; to create a community theatre in Dalhart, Texas that would become known far and wide as one of the finest community theatres in the state.

There were three productions in the first year: "Rainmaker", was performed at K Bob's Steak House - requiring that the set be torn down every night and rebuilt every afternoon. "Bus Stop", was presented at the coliseum and "Barefoot in the Park", also the coliseum. Through the next eight years, a high level of quality was achieved and maintained as the group moved their portable stage from pillar to post. The number of volunteers, memberships, and local support all flourished through these years.

In the summer of 1988, DCT (Dalhart Community Theatre) embarked upon a very ambitious project, the production of "The Ballad of XIT"; a melodrama written by a local author, Kaye Chandler Peck, based on the historic XIT Ranch. The production surpassed everyone's expectations.

In April of 1989, The DCT realized their fondest dream, as they took possession of the La Rita Theatre building. The building was in receivership at Dalhart Federal Savings and Loan. Jimmie Pigman,late Chairman of the Board at Dalhart Federal, worked with DCT in a most generous manner, to enable the purchase of the La Rita. Our group, individual guarantors on the note, had the funds to start at no interest for twenty years.

To strip away the "dust bowl" dirt, the deterioration of the plaster walls, the roof damage; twenty volunteers rolled up their sleeves and went to work. On May 15, 1989, the last of twenty-two truck loads of debris were revoked to reveal the theatre beneath.

The group of volunteer construction workers were joined by actors and technicians to begin set construction and rehearsals of "The XIT Comes of Age"; the second melodrama of a trilogy of historical scripts. By June 23, 1989, the lights came up on the first performance in the theatre's new home. This building was far from perfect with its antiquated restrooms, and the total absence of dressing rooms and bathroom facilities for the players.

One year from the signing of the ownership contract, in April, 1990, DCT received the Golden Touch Award, from the Golden Nail committee of the Amarillo Chamber of Commerce.

With the completion of Phase I of renovation; the third melodrama, "XIT Remembered", opened to record audiences.

In 1991, we produced "You Can't Take it With You", "The Passion of Dracula", and "A Madrigal Dinner". The numbers continued to grow, for private performances, as well as performances for the public.

Past directors of various productions have been Carol Hendrix, Mary Jo Ondracek, Warren Slaughter, Doyle Hanbury, and others. Our current board president, Tammy Schneiderjan, has been directing the annual melodrama as well as other plays.

We also have contracted with the WTAMU Showcase in a Suitcase. The WTAMU College of Fine Arts' focus is to enhance outreach experiences to many rural towns and shcools in the Texas Panhandle. The La Rita has hosted Helen Blackburn and friends, two silent black and white movies with a full stage orchestra accompaniment, the Harrington String Quartet, and a musical program entitled "Cabaret".

How to Find Us

Get Connected With Us.